SPJRD has been recently joined by Dr. Kristof Savski, an Assistant Professor of Linguistics at the Faculty of Liberal Arts, Prince of Songkla University, in Hat Yai, Thailand. He has his research papers published in journals indexed in Scopus and Web of Science, which are a few of the indexing bodies prescribed by the University.

Dr. Savski, moreover, has already been working with the SPJRD Editorial Team in reviewing research articles submitted to SPJRD Volume 27, for its second issue release on September 2022.

Meanwhile, Dr. Peter Paul Elicor, the Area Editor of Social Ethics Society Journal of Applied Philosophy, and Post-Doctoral Fellow at the University of Salzburg, Austria, has recently become an addition to the same board of Reviewers. He has accepted the advisory role for SPJRD in an invitation during the Publication Unit's Workshop on International Journal Indexing, where he appeared as one of the Resource Persons of the activity.

In his intent of sustaining visibility of his publications, Dr. Elicor published his works in ACI, Scopus and Web of Science-indexed journals.

One of the pursuits of SPJRD is to ensure peer-reviewed quality publications for the University of Southeastern Philippines. Thus, the recruitment of international experts in the field of research is fundamental to its cause. Today, Dr. Savski and Dr. Elicor add to the pool of SPJRD international advisers which have come from Australia, Indonesia, Japan, Latvia, Malaysia, Oman, USA, and Yemen. 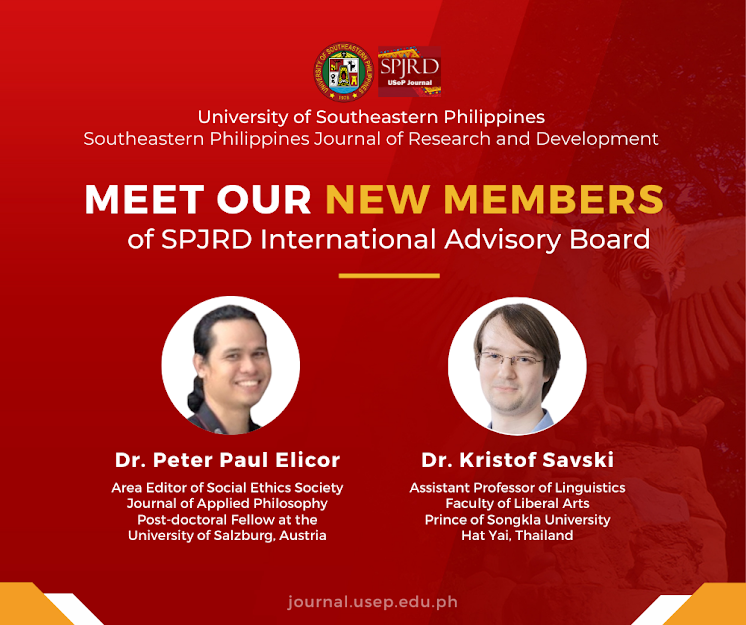